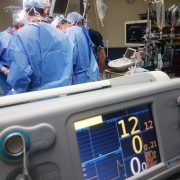 The Mount Sinai Hospital also happens to be the location of the country’s largest WTC Health Program Clinical Center of Excellence. The 2010 program provides long-lasting, long-term medical services to those who were affected by the tragedy of the 9/11 terrorists attacks upon the World Trade Centers in New York City.

The research staff at Mount Sinai Hospital has documented countless long-term mental health problems and physical problems enacted by the attacks on 9/11. They have used this database to treat those who have been affected by the disaster. Asbestos related illnesses, such as mesothelioma, have arisen within the populace of New York over the past few years due to the cloud of toxic substances that hovered over much of the city for entire weeks. The New York City Police Department has gone as far as honoring Dr. Flores, on staff at the hospital, for his service to New York firemen and policemen that were involved in 9/11 rescue missions and cleanup efforts. In addition to Dr. Flores, the Mount Sinai Hospital staff includes world-class thoracic surgeon, Dr. Andrea Wolf. Both Dr. Wolf and Dr. Flores were trained under pleural mesothelioma treatment pioneer, Dr. David Sugarbaker.

The Mount Sinai Health System offers cutting-edge medical, radiation oncology, and surgical services. The level of expertise offered at the Mount Sinai Hospital can only be found at major academic centers in the United States.

The yearly U.S. News & World Report Best Hospitals poll constantly returns to Mount Sinai, placing it among the twenty best cancer-care centers in the entire country. In the yearly survey, the Mount Sinai Hospital receives high marks in many different disciplines and specialties.

A Legacy of Asbestos-Related Disease Research

Irving J. Selikoff, M.D., one of the Mount Sinai Hospital’s foremost experts on asbestos-related diseases, published groundbreaking work throughout the 1960s to 1970s on working-class diseases and ailments such as mesothelioma, lung cancer, and asbestosis. Dr. Selikoff eventually climbed the ranks to the head of the country’s discussion on asbestos-related ailments and diseases due to his work in the 1960s and 1970s. His work helped revolutionize Occupational Safety and Health Administration (OSHA) guidelines. These guidelines, that regulated asbestos and related compounds in the workplace, would change the dialogue around occupational disease forever. He was at the forefront of research that discovered the connection between asbestos, cigarettes, and lung cancer. Dr. Irving J. Selikoff was the director of the Environmental and Occupational Health Division at Mount Sinai until his death in 1922. After his tragic death, the division was renamed the “Irving J. Selikoff Center for Occupational and Environmental Medicine”.

The hospital maintains its dedication towards studying and eliminating occupational diseases caused by asbestos as well as related toxic substances. Due to its reputation as a teaching hospital, the cancer center strives to lead the charge of new science in medicine, especially in regard to the study of cancer.

Thanks to the world-famous Tisch Cancer Institute, Mount Sinai is able to provide its clients with access to various clinical trials and breakthrough cancer treatments.

Dr. Flores, the Mount Sinai Hospital’s chief of thoracic surgery, leads the charge of physicians and specialists dedicated towards the care of patients fighting mesothelioma. The team of doctors at Mount Sinai contains many disciplines, such as radiologists, pulmonologists, thoracic surgeons, and pathologists in order to provide the most forward-thinking, cutting-edge treatment possible for mesothelioma patients.

Mount Sinai typically administers multimodal treatment approaches that are personalized treatment plans including combinations of radiation therapy, chemotherapy, and surgery. Dr. Flores is seasoned in the fight against mesothelioma and other asbestos-related ailments. Flores advocates surgical techniques that are as minimally invasive as possible, while also preserving or improving the individual patient’s quality of life.

The team at Mount Sinai conducts and participates in ground-breaking studies that include clinical trials and research on the molecular level. Patients suffering from mesothelioma have the option of benefiting from the expertise of world class specialists at Mount Sinai Hospital.