Portsmouth Naval Shipyard is one of the nation’s few remaining naval shipyards. This shipyard was first used by the government in the early 1800’s to launch warships. Located at Portsmouth Harbor in Maine, the historical shipyard began servicing submarines during World War I. 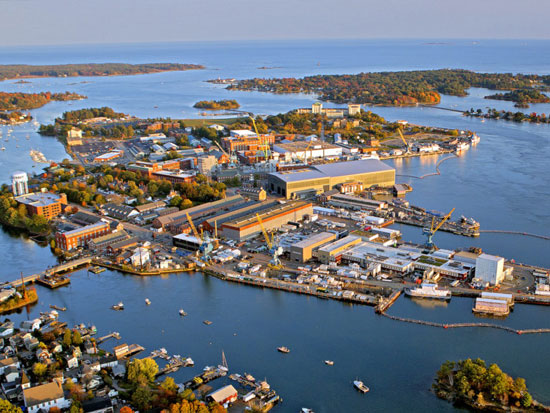 Like many military vessels, submarines serviced and fabricated at this facility contained high levels of asbestos. Workers commonly spent their days inhaling the toxic materials and absorbing the dangerous fibers through their skin. They sometimes also came home covered in the material, which caused secondhand exposure to their families. At the time, these types of insulation were thought to be the best because they worked well to protect against heat and were fireproof. It wasn’t until years later, after workers began getting sick and dying, that such exposure was linked to mesothelioma. This type of cancer has since been scientifically proven to be caused only by exposure to these potentially deadly silicate minerals.

This Kittery, Maine shipyard exposed thousands of people to potentially deadly diseases over the years. Aside from submarine workers, people who worked in the nearly 400 surrounding buildings were also exposed. Deadly insulation was also used inside these buildings’ wall boards and in water pipes. The fibers were commonly found on the uniforms worn by workers each day. Until approximately 1975, poor or non-existed ventilation inside the buildings caused workers to potentially get sick at alarming rates. Research conducted by the National Institute for Occupational Safety and Health in 1978 showed that almost 65 percent out of more than 4,000 people studied had been exposed to deadly insulation materials and were at risk for developing fatal cancer and other diseases.

Multiple lawsuits have already been settled and won over the toxic exposure of workers at Portsmouth Naval Shipyard. While the Federal Employee’s Compensation Act protects the Navy from liability lawsuits, shipyard workers and their families have successfully sued the companies that manufactured and distributed the asbestos that caused wrongful deaths and debilitating ailments. Many of these lawsuits have resulted in large settlements for compensation because the manufacturers failed to inform people that their products were toxic and could cause health problems.

In one such lawsuit, which was filed by a large group of former shipyard workers, plaintiffs sued more than 25 manufacturers and distribution companies for negligence because the toxic exposure to the companies’ products led to wrongful death and occupational disease. In another lawsuit, which was eventually settled for more than $500,000, four manufacturers were sued. In this case, the daughter of an insulation worker died of secondhand exposure because her father came home from work every night with his clothes covered in toxic fibers.