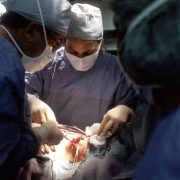 In the state of Ohio, the Cleveland Clinic is the premier institution in providing patients with the optimal care and treatment. Since its establishment in 1921, clinical research and the education of patients has helped improve the lives of thousands of individuals.

An world class team of medical specialists work in unison to treat an array of chronic illnesses, with a strong focus on the recovery from those afflicted by mesothelioma. The team consists of a diverse and experienced professionals, with specialties in thoracic surgery and oncology among other disciplines. Their cooperation is an essential part of the effectiveness in the facility’s ability to accurately diagnose and treat patients based on their personalized medical needs.

Dr. Sudish Murthy is a specialist in laparoscopic procedures. Dr. David Mason, one of the world’s leading surgeons, specializes in lung transplants.

All of the doctors at the center have a keen experience in the efficient and compassionate treatment and surgical procedures involving lung diseases and cancers.

The well being and disease severity of each individual dictates the wide spectrum of options in each patients path to recovery.

The most deadly form of cancer, lung cancer, can only truly be understood through the ongoing investigative research completed in clinical trials, including “Phase I/II study of a triplet combination of CBP501, pemetrexed and cisplatin in patients with advanced solid tumors and in chemotherapy naive patients with malignant pleural mesothelioma.”

Although the development of advanced treatments for mesothelioma is of primary importance, the center conducts research in an indiscriminately fashion with various diseases, prompting the funding of over $235 million in 2010 alone. The advanced network of surgeons, researchers, and nurses, totalling over 950 employees, seamlessly connect the most recent discoveries and updates to other specialists and patients respectively. The research completed at the clinic is the backbone of cutting edge, new methods of treating cancer.

The Cleveland Clinic has received critical acclaim, ranking as one of four of the best hospitals in the United States, according to the U.S. News & World Report’s “America’s Best Hospitals,”.

The outstanding care and meticulous collaboration here has brought rapid growth and prosperity to the clinic and the thousands lives that are treated there.