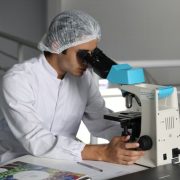 Nicknamed the “Healthcare City”, New Brunswick, New Jersey is the location of some of the most renown medical centers on the east coast. The University of Medicine and Dentistry of New Jersey harbors the Cancer Institute of New Jersey, one of the most prestigious institutions in the diagnosis and treatment of many forms of cancer.

An embodiment of a holistic approach to cancer treatment, CINJ is honored by the National Cancer Institute as being the only Comprehensive Cancer Center in the state, given its unparalleled commitment to outstanding patient care, cancer prevention, education, and clinical research.

As the most fatal cancer, lung cancer is at the forefront of the center’s attention, as a speedy diagnosis is key in treating all thoracic diseases. The hospital’s Thoracic Oncology Program is on the frontline of the treatment and research of mesothelioma and upper esophageal cancers.

This division contains a wide array of medical disaplines ranging from thoracic surgeons and radiologists to nurses and social workers. One of our most distinguished faculty members is Dr. Joseph Aisner, director of the Thoracic Oncology Program. Dr. John E. Langenfeld joins his pursuit as an elite thoracic surgeon.

The treatment of mesothelioma is as diverse as the patients it inflicts. As such, treatment plans vary widely based on the location, type and stage of the cancer.

The general well-being and genetics of the patient are of crucial importance. Customary treatment plans like chemotherapy and radiation, are executed by the program’s specialists, often in unison with other forms of treatment for optimal effectiveness. Clinical trials are a consistent part of the team’s rigorous schedule as this remains the most formidable way to develop new ways to treat thoracic cancers.

Translational research has recently emerged as a highly effective way to transport laboratory results to patients and doctors alike at the Cancer Institute of New Jersey. With more than $95 million in grants every year, this program combines the efforts of institutions, such as the Institute for Advanced Study in Princeton and Rutgers University, with over 155 physicians and researchers to make significant progress in medical treatment and care.

Research is at the heart of every staff member at CINJ. The institute cherishes its cooperative, multidisciplinary approach, collaborating with patients on the most effective treatment options and therapies. Research trials are constantly underway at CINJ, such as “ECOG 1505: Phase III Trial of Adjuvant Chemotherapy.

In 1885, the New Brunswick City Hospital opened its doors. Over 100 years later in 1986, the hospital was renamed as the Robert Wood Johnson Medical School. The 16 community hospitals treat over 89,000 patients annually with supreme excellence in cancer treatment, earning Woods reputation as one of the highest ranked comprehensive cancer centers according to the American College of Surgeons’ Commission on Cancer.

The 16 community hospitals treat over 89,000 patients annually with supreme excellence in cancer treatment, earning Woods reputation as one of the highest ranked comprehensive cancer centers according to the American College of Surgeons’ Commission on Cancer.