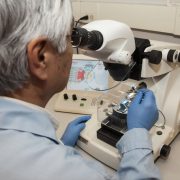 Located in Western Pennsylvania, the UPMC Cancer Centers network is nationally renown and has been a leader in mesothelioma work for years.

The UPMC Cancer Centers have earned the respect of cancer clinics all over the country, offering an integrative approach to care and an enormous range of treatment options incomparable to other locations in the region.

When patients arrive at UPMC’s cancer centers, they are treated with respect and seriousness from the moment they step through the door. Patients receive unparalleled diagnoses and treatment from a small army of several hundred doctors, research scientists, oncologists, and other health care professionals at their thirty five satellite locations.

Together, all these resources comprise one of the country’s largest and most successful cancer care networks.

The Hillman Cancer Center is typically regarded as the network’s flagship location. The Hillman Center also serves as the home of the University of Pittsburgh Cancer Institute; at this location, patients are all guaranteed the most forward-thinking approaches towards prevention, detection, treatment, and initial diagnosis. Thanks to the multitude of medical resources available to the patients at Hillman, the newest developments in cancer treatment and diagnosis are always within reach.

The work done at this cancer center has earned the designation of Comprehensive Cancer Center, instituted by the National Cancer Institute (NCI). This designation is an elite title, reserved exclusively for cancer care facilities with vast resources, innovative leadership, and extensive clinical trials. Their model for cancer treatment has been so successful that the UPMC Cancer Centers have undertaken an expansion overseas in Dublin as well as Waterford, Ireland.

Existing as a nonprofit healthcare provider, UPMC is breaking boundaries. Due to its nonprofit designation, the capital generated from its research is immediately replaced into the center’s health care services. This includes the special Mesothelioma Care program.

At UPMC, the cancer care center’s Mesothelioma Specialty Care program utilizes an integrative, multimodality approach to treatment. Multimodality means that the treatment involves combinations of surgery, radiation therapy, and chemotherapy. Heated chemotherapy has been a large breakthrough in the treatment of mesothelioma; this therapy is commonly used alongside pleurectomy, which removes the cancerous lining of the chest cavity.

The treatment team is full of surgical oncologists who also happen to be experts in the treatment of mesothelioma and other asbestos-related diseases. Dr. James F. Pingpank and Dr. David L. Bartlett specialize in treating in treating the illness with chemotherapy and surgery, and are therefore the designated peritoneal specialists. Within the specialty center, the surgeons who treat pleural mesothelioma cases are Dr. Matthew Schuchert, specialist in radiofrequency ablation, and Dr. Neil Christie, specialist in minimally-invasive thoracic surgery. Dr. Schuchert also specializes in the use of CyberKnife and all other components of thoracic surgical oncology. In the fight against pleural mesothelioma, Drs. Schuchert and Christie are joined by their colleague, Dr. James Luketich, who is the current acting chair of the Cardiothoracic Surgery department at UPMC.

The two most common strains of mesothelioma, pleural and peritoneal, are treated at the specialized program at UPMC. These two forms of mesothelioma affect the linings of the lungs and the abdomen. The foundation for the treatment of these ailments is accurate diagnostic testing and imaging.

Forward-thinking biopsy tests as well as imaging scans are utilized in order to understand the particular cancer’s cell type and current stage. This information, once synthesized, guides doctors towards an effective treatment regimen. On the other hand, UPMC’s surgical services and integrative treatment plans make up the bulk of their excellence. A world-class army of physicians that specialize in chemotherapy, radiation therapy, surgery, oncology, pain management, and palliative care collaborate regularly in order to provide the patient with a specialized treatment plan geared towards their particular needs. All new patients are assigned to a UPMC coordinator.

This coordinator aids the patient with scheduling appointments, and acts as galvanizing force between the patient and the entire team of physicians, ensuring proper communication between all parties.

The revered Lung and Esophageal Cancer Treatment Program is made up of world-renown thoracic surgeons, medical oncologists, pulmonologists, pathologists, and radiation oncologists. This team has made a name for themselves on a global scale. Their hard-earned acclaim is due to the visceral work and first-hand experience that their doctors and researchers, such as Dr. Schuchert, have undergone. Dr. Schuchert is currently the assistant professor of surgery at UPMC’s Department of Cardiothoracic Surgery. He is respected as an intellectual force on the subjects of thoracic research and thoracic surgical oncology. Their team at UPMC enacts an integrative and holistic approach towards treatment, regardless of the strain of the particular cancer.

At UPMC Cancer Centers, there are four central research areas regarded as imperative in the fields of medical oncology and molecular oncology. First is the examination of the biological means that cancer utilizes to develop and eventually progress. Second is the discovery of novel biomarkers to increase understanding of cancer detection and its diagnosis. Third is the development of brand-new therapies to provide successful and integrative cancer treatment. The final aim is to establish and implement effective cancer prevention initiatives.

The National Mesothelioma Virtual Bank was integrated into the Cancer Centers umbrella in 2006. This allowed researchers easier access to help in the battle against cancer and other asbestos related diseases. Specimens and data from over a thousand cases are available for review at their four medical centers. The researchers at UPMC are hoping this will lubricate scientific thought from any angle possible. Plans have been made to expand the bank even further.

Designated by the National Cancer Institute (NCI) as one of the nation’s best cancer treatment centers, UPMC takes part in countless government-funded clinical trials. Occasionally, these trails involve those battling mesothelioma and other asbestos-related conditions. At the moment, UPMC is taking part in a mesothelioma clinical trial that is attempting to combine chemotherapy and pemetrexed, a drug also known as Alimta.

The trial aims to evaluate the benefits of administering pemetrexed every twenty-one days after the first-line chemotherapy has been administered to a patient. This could act as a means to control or entirely prevent tumor growth as well as spreading. The trial will last ten years, beginning in April 2010, and finishing in 2020.

The University of Pittsburgh Cancer Institute, founded in 1985, was the youngest institution to earn the award from the National Cancer Institute. This proves its absolute dedication towards basic science, education, patient care, clinical research, and cancer prevention. The UPMC today is able to offer one of the nation’s largest community networks of cancer physicians and cancer specialists. Due to their incredible recruiting success, the facilities have also received more and more funding from the government over the years. The UPCI received around one-hundred and seventy million dollars in 2010. The U.S. News & World Report regularly recognizes the UPMC as one of the nations premier cancer programs.

The UPCI received around one-hundred and seventy million dollars in 2010. The U.S. News & World Report regularly recognizes the UPMC as one of the nations premier cancer programs.